For Christmas we got our son a guitar. Since Christmas he's had it out of the case and plugged in to his amp less than 5 times, I'm certain. I asked him last week how it was going with learning to play. He explained that the guy on the instructional DVD was boring. Sigh. I guess I can't complain too much since it's been over a year that I have owned my bass guitar and I have still yet to learn how to play it.

So last week I had an idea. Since I haven't learned to play the bass yet and he's unlikely to take the initiative to learn to play guitar on his own, I decided to trade in my bass and buy a guitar so that we could learn to play together. Genius, huh?

After a (not so) quick trip to Guitar Center, I am now the proud owner of the Les Paul you see here. 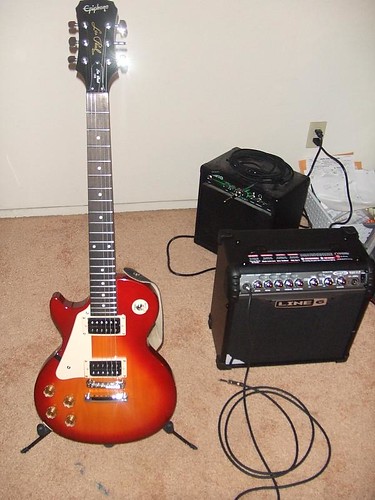 So when I got home with the new guitar, he was pretty excited to check it out. He then suggested that we compare our guitars. So upstairs we went and out came the amps. We both plugged in goofed around for at least 30 minutes. It's probably too early to call my plan a success, but it sure is encouraging!

Near the end of our “jam session” I asked him to bring me the instructional DVD. We threw it in to the computer and started watching a few minutes of it. Ya know what? The dude in that video IS boring! Not to mention that he moves too quickly between steps. No wonder he lost interest so quickly!