Last month at work, I took on a new project; AppPresser. If you haven't heard of it, AppPresser is a suite of plugins for WordPress that make it easy for site owners to turn their site into a native iOS or Android app. Making apps is something that I've wanted to do for several years, so this opportunity to work with the AppPresser team was very exciting.

Part of my job at AppPresser is to get intimately familiar with the plugin and all the extensions. What better way to do that than to use it to build my own app? So over the course of a couple weeks, I turned hotbookdeals.com into an iOS app. (download and check it out here)

As I was building the app, part of the process is to create test versions of the app that can be delivered to a select group of devices for testing purposes. It's a great way to get the app into the hands of a couple users prior to pushing the final version to the app store.

When I got to the test build stage, it struck me that I could build apps to put on my phone for personal use without having to submit them to the app store. I've built DOZENS of WordPress sites over the years for single-use projects. Having the ability to turn those into apps? Mind Blown!! 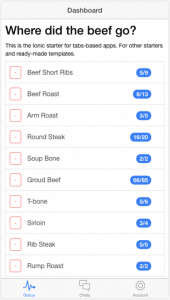 I brought up this concept during our next team meeting and asked if anybody else had created single-use apps for themselves. I was stoked to hear that I wasn't the only one. One of the guys on our team showed us his app he built to track how many specific cuts of meat remain in his freezer. (probably the best use of an iOS app I've ever heard of, btw)

I've got a couple ideas already for some one-off apps I'd like to build. One will be a take on a WordPress site I built a while back that helps answer the question “what do you want for dinner tonight?” I'm sure I'll build an app that has something to do with CrossFit at some point, too.

But as I was thinking about it, I wanted to throw an offer out there. Do you have a cool idea for a simple app that you'd love to have on your phone? Something where the data can be stored in WordPress, but you can have both a display and input interface wrapped in an app. If so, drop a comment below and I'll pick one or two of the suggestions and build them. No strings attached. Although, I reserve the right to use the app myself and probably blog about it.

Looking forward to your ideas!